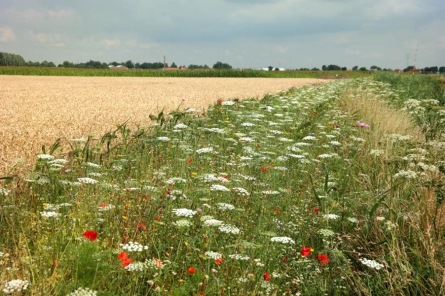 From reports «Centuries-old practice is proving effective as a pesticide», of Cerith Gardiner, published at Aleteia, «These Farms Are Testing A Low-Tech Pesticide Alternative: Flowers», of Adele Peters, published at Fast Company, «Farmers Are Using Flowers To Beat Back Pests Instead Of Chemicals», of Aimee Lutkin, published at Greenmatters, “Flower strips support ecosystem services only when they have the right flowers“, published at The Applied Ecologist’s Blog, and “Research shows importance flower strips for agriculture“, of the Institute for Biodiversity and Ecosystem Dynamics.

One of the big issues farmers have to contend with is keeping their crops pest-free. Some farmers are looking for ways to control their crops in a way that is healthy for the environment and the consumer. In fact, organic farmers are now turning to practices carried out by previous generations by actually using flowers as a means of pest control.

The idea is to line the field of crops with strips of flowers that act as a “bug highway.” Insects like parasitic wasps, which are useful as they eat crop-destroying aphids while they are still larval, can find a home among the flowers and can act as a natural pest control.

Tiny parasitic wasps, for example, eat aphids, a pest for multiple crops. But the wasps only provide pest control when they’re first born; the adults need to eat pollen and nectar from flowers. In a typical industrial farm field, with a single crop planted across acres, there isn’t enough food for the natural predators to survive. Planting strips of flowers can change that.

In the past it was common practice for farmers to surround their crops with flowers to boost biodiversity. However, innovative farmers are adding these strips of flowers in among the actual crops, allowing the useful insects to be more effective and cover a wider area.

Planting flowers to encourage bugs may seem obvious, but a certain amount of precision is needed to encourage the right kind in the right amounts, which requires more modern monitoring techniques.

Experts at the Center for Ecology and Hydrology in the UK Ben Woodcock and Richard Pywell are studying the most beneficial planting techniques to make sure the right balance is created, and introducing the right sort of bugs in the right area. The study also includes borders of wildflowers around each field, something that some farmers have used over the past two decades in the area to promote general biodiversity, not specifically for pest control. But because small bugs can’t travel far, researchers are testing strips of flowers placed in strips in the middle of fields. It’s something that’s possible to do now because farming technology has evolved.

Other countries have been experimenting, too; in Switzerland, researchers planted a mix of poppies, cilantro, dill, and other flowers in combination with fields of wheat. They found that bugs who eat pests that eat wheat were encouraged by the flower growth, particularly ladybugs. Leaf damage declined by 61 percent. The goal is to find a mix of plants that help increase yield, which would justify the care required to cultivate them.